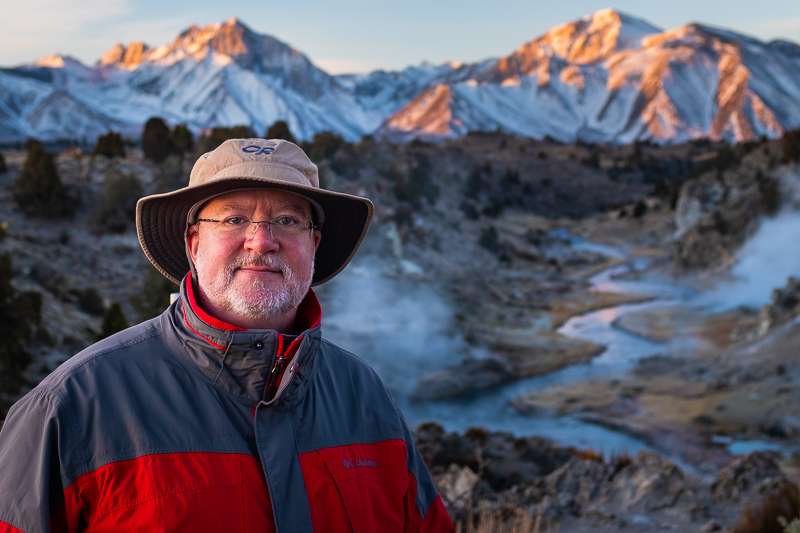 Portrait of the Artist as a Cold Man. Photograph by Trey Amick.

Currently, there are several thousand people following me on social media and subscribed to my newsletter with both groups continuing to grow at a blistering pace. Compared to those photographers who are much more well known that I, those numbers are very small potatoes. But for a life-long introvert such as myself, those numbers are mind blowing and scary. Especially given that it’s only been about 4 months since I decided I really should get out of my comfort zone and try to promote my work. I think about 1/3 of the folks following me and/or have subscribed have come aboard in just the last 2 weeks or so.

Why did I suddenly decide it was time to promote my work? Well, at some point I would really like to retire from my job and live on an income derived from the sale of my prints and other photography-based income channels yet to be determined. So let’s get the obvious out into the open at the start: I’d really like you to buy a print from me. Actually, I’d really, really like it if you bought several prints from me, but there’s no hurry.

I’ve learned enough about the art business to know that most sales come from those who know and trust the artist. When I mentioned being an introvert a few sentences ago, I really meant it. It’s very difficult for me, under normal circumstances, to make an effort to get to know other people or make myself known to them. Except, for some reason, when it comes to my art. For reasons even I don’t understand, the chance to talk about myself in the context of my art is something I look forward to and actively seek out.

A few years ago, I had a gallery in Richmond, Virginia at Art Works Galleries and Studios and I remember my mother being rather surprised, given how quiet and reserved I normally am, to learn that I actually enjoyed the events they held every month and talking to so many people. I don’t have that gallery anymore, as I had to give it up when I relocated Northern Virginia, but I miss it terribly.

So I’m going to use this blog post as a proxy for an art gallery on a major event night and you, dear reader, are an art patron, as you obviously are, seeing as you’ve stuck with this rambling post this long, so you might as well come along for the rest of the ride…

Hi! I’m Stephen Girimont, pleased to meet you. Call me Steve. I hope you enjoy what you see, I’ve spent a lot of time and effort making it. How did I get started in photography? I’d have to say that my interest in photography began with my father while I was growing up in Bluefield, West Virginia. He got very into photography before I was a teenager and I remember being curious (and a little intimidated) by his camera and the various lenses he would bring with him on all our family trips. Coincidentally, it was on one of those family trips that my fascination with the Southwest was formed when we drove to Arizona one summer to visit my grandmother in Tucson.

Of course it was my father who gave me my first camera, a Ricoh KR-10 with a couple of Vivtar zoom lenses. It might have been shared between my brother and I; I can’t quite remember. It could very well be that he gave the camera and lenses to my brother and I just ended up “borrowing” them. A lot.

Photography was a hobby for me through college. I was an English Education major at Virginia Commonwealth University. While studying to be a teacher didn’t afford many opportunities to practice photography, being a fencer did. I was a member of the VCU Fencing Club and would photograph many of the tournaments while competing. And thus, sports photography became my primary interest when it came to the visual arts.

After graduating from VCU, I moved to Chapel Hill, North Carolina where my best friend lived. My intent was to establish residency for a year before applying to graduate school at UNC (in Medieval Literature, if you can believe it.) My side interest in photography was the excuse I used to apply for a job at Foister’s Camera on Franklin Street.

I got the job.  And I jumped in with both feet.

I learned absolutely everything I could about photography while working at Foister’s. I read every manual and every book in the store. One of my co-workers taught me how to process film and make prints in the darkroom we had in the basement. The owner encouraged his staff to experiment with the various cameras and lenses on the weekends to be more knowledgable sales people and I took advantage of that frequently.

When Foister’s went out of business about a year later (not my fault, I SWEAR!), they were purchased by University Camera in Durham and I worked for them for the next year or so, continuing to absorb as much about photography as I could. It was readily apparent that I was never going to pursue that doctorate in Medieval Literature. Making pictures was MUCH more fun than reading Middle English.

But I knew there was much more to learn about photography than I would be able to experience working at a camera store, so I started researching photography schools (this was way before the internet when all learning had to be paid for). It came down to a choice between the Rochester Institute of Technology in upstate New York, or The Brooks Institute of Photography in Santa Barbara, California. I carefully considered the merits of both schools, then considered the climate differences between upstate New York and Southern California. SoCal won hands down.

Brooks didn’t have a program in sports photography, but they did have one in Scientific and Technical photography and the literature showed images of people taking high-speed photographs of bullets in flight and even explosions, and did that ever look like fun!

In the three years I was there, I learned so much about portraiture, corporate photography, studio product photography, lighting, high-speed photography, forensic photography, architectural photography… You name it, I learned how to do it. Yes, I have pictures of bullets in flight, shockwaves and all.

Oddly enough, landscape photography is something I never did while at Brooks. Now I kick myself for the missed opportunity. There I was, living in one of the most beautiful parts of the country, within easy driving distance of even more beautiful parts of the country, and I never once considered landscapes. Maybe it was because as a student at Brooks you weren’t being graded against the work of your fellow students, you were being graded against the work of the best photographers in the world. Into model photography? Prepare to be compared against Helmut Newton, Patrick Demarchelier, Bruce Weber and Richard Avedon. If you turned in a landscape image, well, it better rate against Ansel Adams or Elliot Porter or you were going to be toast. I don’t think I had it in me at the time to try.

After Brooks, I moved back east and continued my photography education by assisting professional photographers in the D.C. area. Eventually returning back the Richmond area, I taught myself web programming as a means to market my photography and that knowledge turned into a bit of a career in software engineering with a major financial services company. It’s that career from which I would dearly love to retire with your kind assistance.

I’m married with two wonderful children, both of whom are are on the spectrum, one quite severely. My wife is incredibly supportive and quite the artist herself, currently experimenting with acrylic pours which become the basis for earnings and pendants.

While working in the financial services industry I still kept up with photography, having had a sports photography business for a time specializing in mountain bike races and a wedding photography business that died with the economic recession of 2008. It was at that point that I decided that I rather enjoy the solitude that comes with landscape photography and have been solely devoted, photographically, to that genre ever since.

So that’s me, in what is most likely way too many words. I apologize and commend you for lasting this long. Of course there is a lot I left out, like my experience in Astrophotography, being the staff photographer for the Griffith Observatory in Los Angeles and the time I photographed the Dalai Lama for Greenpeace.

“What camera do you use?”