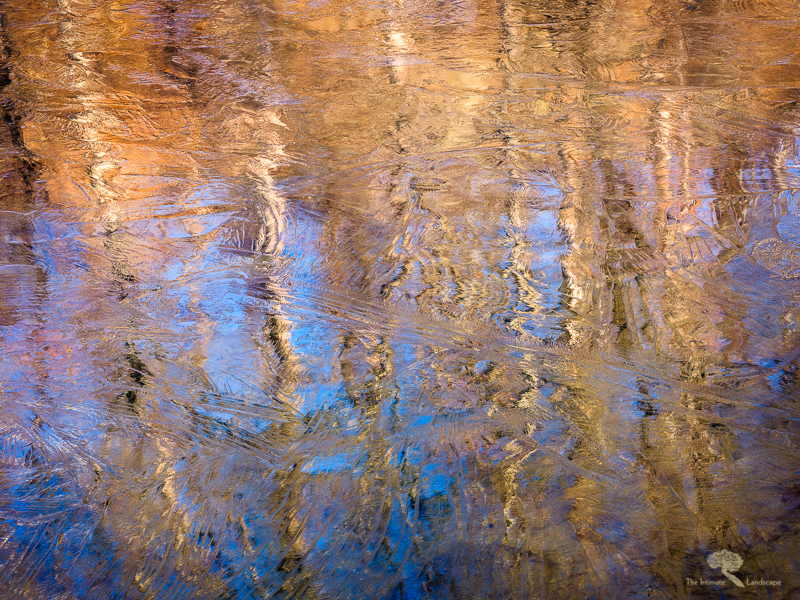 I had been living in Northern Virginia for a little over two years when I happened to discover a park I had never heard about that provided access to a stream named Goose Creek, near where it flows into the Potomac. The entrance to this park is rather hidden in a neighborhood, which I suppose is why I took so long to discover it. As a matter of fact, the entrance to the park looks like any other driveway in the neighborhood, except for the fact that it goes between two houses rather than right up to one. I only discovered it because I happened to notice the symbol for a park on the GPS display in my car while driving by one afternoon and took the time to investigate. The park is called Kephart Bridge Landing and there are many interesting civil-war era ruins (bridge and building foundations) to be found within its confines.

On a cold February morning shortly after I discovered the park, I happened to be exploring along the banks of Goose Creek when I came across a pool of water just slightly frozen over. This pool was left behind after high waters in the creek had started to recede, and a cold snap of temperatures that had not gone above freezing for several days had apparently frozen the water in the pool. On the morning that I was exploring, the temperatures had risen enough a day earlier to start thawing the pool, but there was still a thin layer of ice remaining. The creek was still feeding a trickle of water into the pool and the motion of the water under the thin ice had created ripples and ridges on the surface, which may have just re-frozen the night before.

The trees on the far bank of Goose Creek were illuminated by the early-morning sunlight and I realize that I could position my camera and tripod in such a way as to catch the warm tones of the sunlit trees reflecting against the uneven surface of the ice. The open sky through the trees provided cool tones to complement the warmth from the trees. I captured the reflections of the trees from many angles over the course of an hour of so.

I wound up with many very nice images of the icy reflections, from which I created a series of three to offer for sale to the public. The images in the “Ice-Bound Abstract” series can be seen by clicking this link. There is a fourth image that I reserved for an extremely special limited edition printing. I have, I think, two prints from that edition remaining that I may offer for sale on this site at some point in the future. The rest are in the hands of a very select group of photographers who’s company I enjoy very much but get to experience very little.

The Charisma of Fog