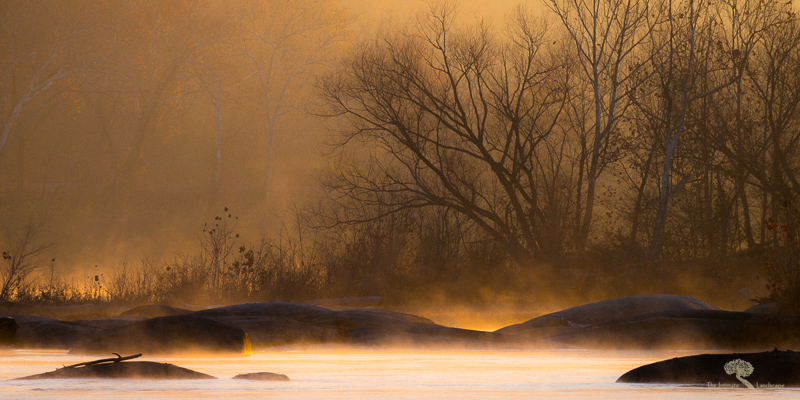 "Ghostly Morning" - Mist rises during a late autumn morning, coloring the sunrise on the James River.

The Many Personalities of Fog

Fog is, by far, the atmospheric phenomenon that I wish for most in my landscape photography. It conceals as it reveals, and the character it brings to a scene can often make for once-in-a-lifetime experiences because, even when returning time and again to the same location, the fog is never the same twice.

When I say “it conceals as it reveals,” I suppose the most extreme example of this is the “pea soup” type of fog that obscures pretty much everything beyond a few feet in distance. But it’s not a sharp cutoff. Rather, it is a gradual transition that can be used to great effect under the right conditions.

When the fog is not quite so extreme and tends to just sort of… hover… over a location, the rising sun can do wonderful things. Backlit fog, where the sun rises in the background of a composition and directly illuminates the fog is particularly interesting. If the sunrise is fairly colorful due to atmospheric conditions, the fog itself can take on that color as well, as in the image at the top of this blog post. “Ghostly Morning” is an example of particularly warm sunrise light streaming in through trees and backlighting different parts of the scene, from the far background, resulting in silhouetted trees in the middle distance, to patches of mist rising from the foreground water.

The rising sun can also enhance the very subtle structures present in fog, enhancing the contrast between rising streamers and less-enshrouded areas.

Sometimes, the rising sun may be blocked from directly lighting the fog, either due to obstructions in the landscape such as trees or hills, or perhaps areas of fog in the direction of the sunrise are so thick that no light gets through. In these conditions, if the fog is not so thick vertically, the color of the sky above can tint the fog below.

Such was the case when I captured the image I titled “Japanese Garden.” The striking blue tint in the image comes from the clear blue sky above influencing the color of the mist over the river before the sun had risen far enough to peak over trees to the east and directly illuminate the scene.

Sometimes, the color in a scene can be so bold and striking that it powers through the fog when conditions are right.

Many times, fog is unable to form when there is a breeze. Fog over a river or damp ground frequently requires stillness for the water vapor to condense out in the cool air. But when the temperature differences between the water and the air are extreme enough, the fog can form even while there is a breeze, and this is when we return to the beauty of how fog can “conceal as it reveals.” The patient photographer can be rewarded as different areas of a composition are, in turns, obscured and exposed.

With the exception of “Goose Creek Fog” all the images in this article were taken not far from each other within the same  stretch of the James River near Richmond, Virginia over the span of several years. I always hope for fog when I’m heading to the river and when conditions bless me with the mist I love, it’s always a unique experience.

Redbud on the Rocks