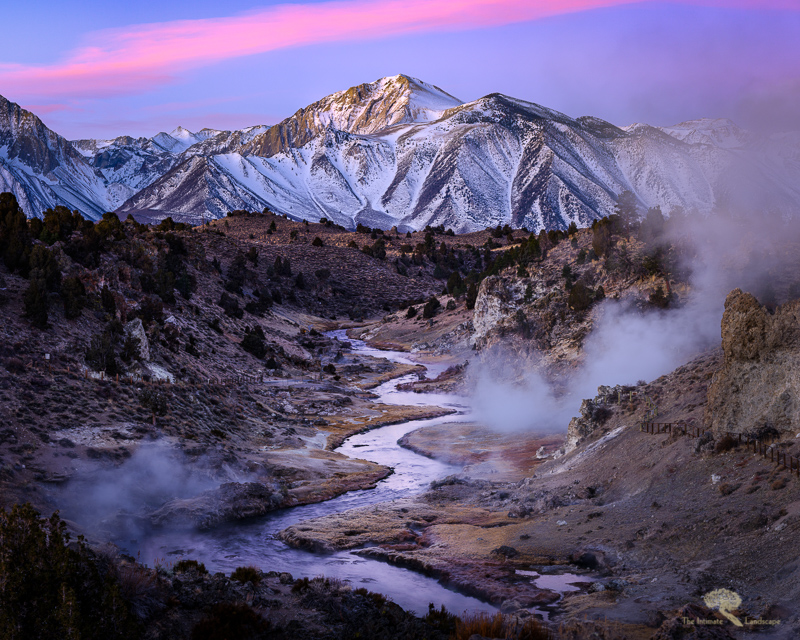 Sunrise comes to Laurel Mountain in California's Eastern Sierra Mountains as the backdrop to an incredible scenic view.

Every so often, an image I’m working on takes more than its fair share of effort to reach a point where I’m satisfied with how the image prints and I consider it done. A case in point is “Laurel Mountain Sunrise” which took me the better part of 3 weeks to finish and burned through dozens of prints along the way.

As an artist, one of the hardest tasks we have is knowing when we are finished with a work. Regardless of the medium, be it painting, sculpting, mixed media, what have you, knowing when to stop can be really hard. How many times have we seen or imagined a sculptor taking one last whack with a chisel only to have the entire statue crumble into pieces?

Working on “Laurel Mountain Sunrise” was a bit like that. The mist in the scene is actually steam from hot springs that feed into the creek running through the scene. The hot water gives the creek its name: Hot Creek. The steam was prominent that morning as the air temperature was a bit cold at a mere 14 degrees Fahrenheit.

For days I would work on this image, trying to get the many tones and colors in the sky, mountains and gorge just right. I would literally work all day, and run off some test prints in the evening. The next morning, I would come back in to my office, take one look at the test prints on the table and think “Were you hallucinating last night? These are terrible!” Many test prints were shredded in disgust.

My problem was in consistently going too far with the processing on the foreground of the image. That gorge is so full of texture and tonal variations that I just kept bringing more and more detail and color out of it and it would slowly grow into this monster of contrast and color that overwhelmed the scene.

It wasn’t until I took the time to close my eyes and concentrate on remembering exactly how I perceived the scene when I was there that I was able to put some limits on how I was processing the original file and finally created the image that perfectly represent what it was like to be there that morning. It was only when I was happy with how the image looked when printed, that I offered prints for sale. You can see the print options for Laurel Mountain Sunrise by clicking:

As with many of the images I create, this is another example of what I’ve referred to in previous blog posts as a “multi-row panorama.” But it occurred to me that while I’ve described what that is in the past, I’ve never attempted to illustrate the process here on my blog.

Shown below are the images which were used to combine together to form the final image at the top of this blog post. Please note that I shoot my original images in the camera with very low contrast and almost no color saturation in order to preserve the maximum amount of detail in the original files. I then work to bring back the colors and contrast that I remember from the scene. Here are the images which combine together to form the final image:

The trick to creating a composite panorama is to have a significant overlap between images and to shoot a wider composition than you need to allow for cropping and a bit of image loss due to the process of combining the images. I actually shot more images than shown here, but I limited this example to just the images that wound up being used in the final square crop of the image shown at the top of this post.

I have a YouTube video describing the process of creating a multi-row panorama using an earlier image I shot of downtown Richmond, Virginia, if you are interested learning more about the process…

No, this is NOT a painting!