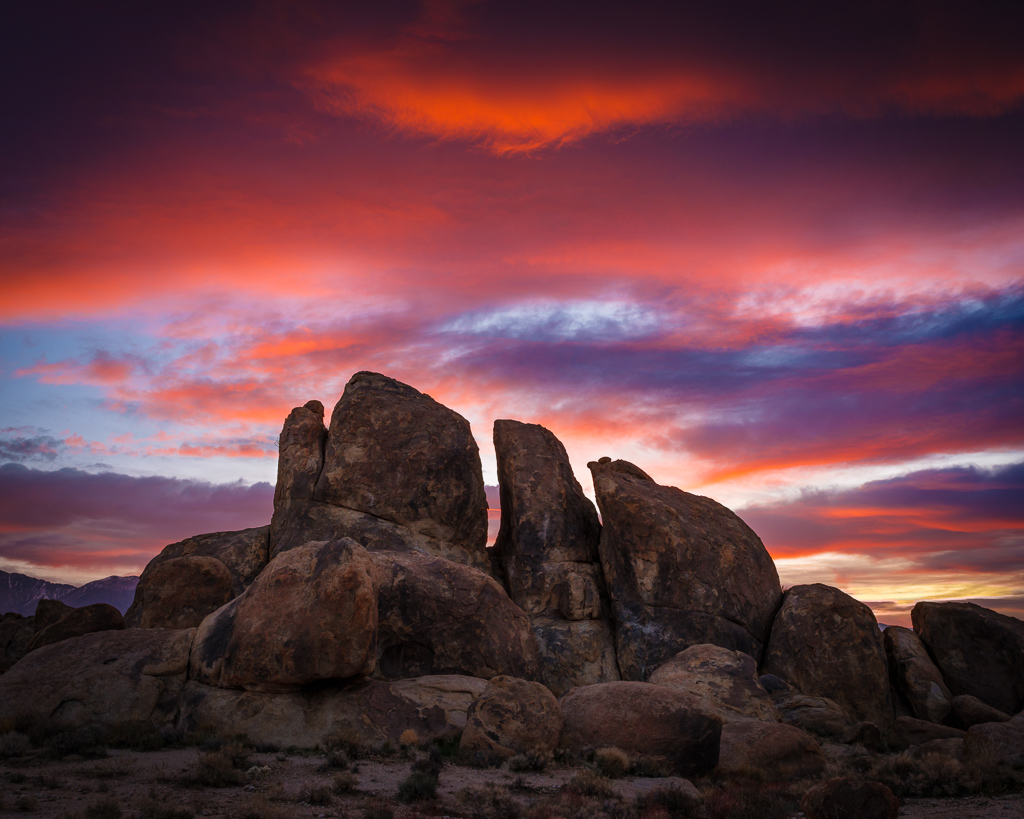 The Alabama Hills aren’t in Alabama (though I’m sure there are hills in Alabama). No, these hills, and the incredible expanse of boulders of every size and shape imaginable, lie at the foothills of the Eastern Sierra Mountains in California, just west of the town of Lone Pine. You’ve seen the Alabama Hills in numerous car commercials, television shows such as Star Trek, and movies like Iron Man, Django Unchained, Man of Steel, Tremors and practically every western ever filmed. I love photographing there and have planned many of my trips out west around opportune times to shoot there.

But noooooooooo! Contrary to all my research and plans, the clouds were lower in the sky, and more abundant. This caused the color to appear in the east and left the mountains to the west draped in drab grey. I held out hope that this might be the kind of sunrise light that inched its way across the sky and that eventually the color would appear over the mountains. I kept my camera, lens and tripod set up for the composition I had worked to find in the pre-dawn gloom, facing away from the color to the east and stood nervously uncertain as I watched the sky to the east get more and more dramatic while the sky to the west got more and more drab, if that were possible.

Eventually, common sense won out and I grabbed my gear and ran like mad about 100 feet or so to get set up to capture this mass of boulders under the incredible display of color overhead. I also have to admit that this is a pretty darn good image for being literally a last-second decision. 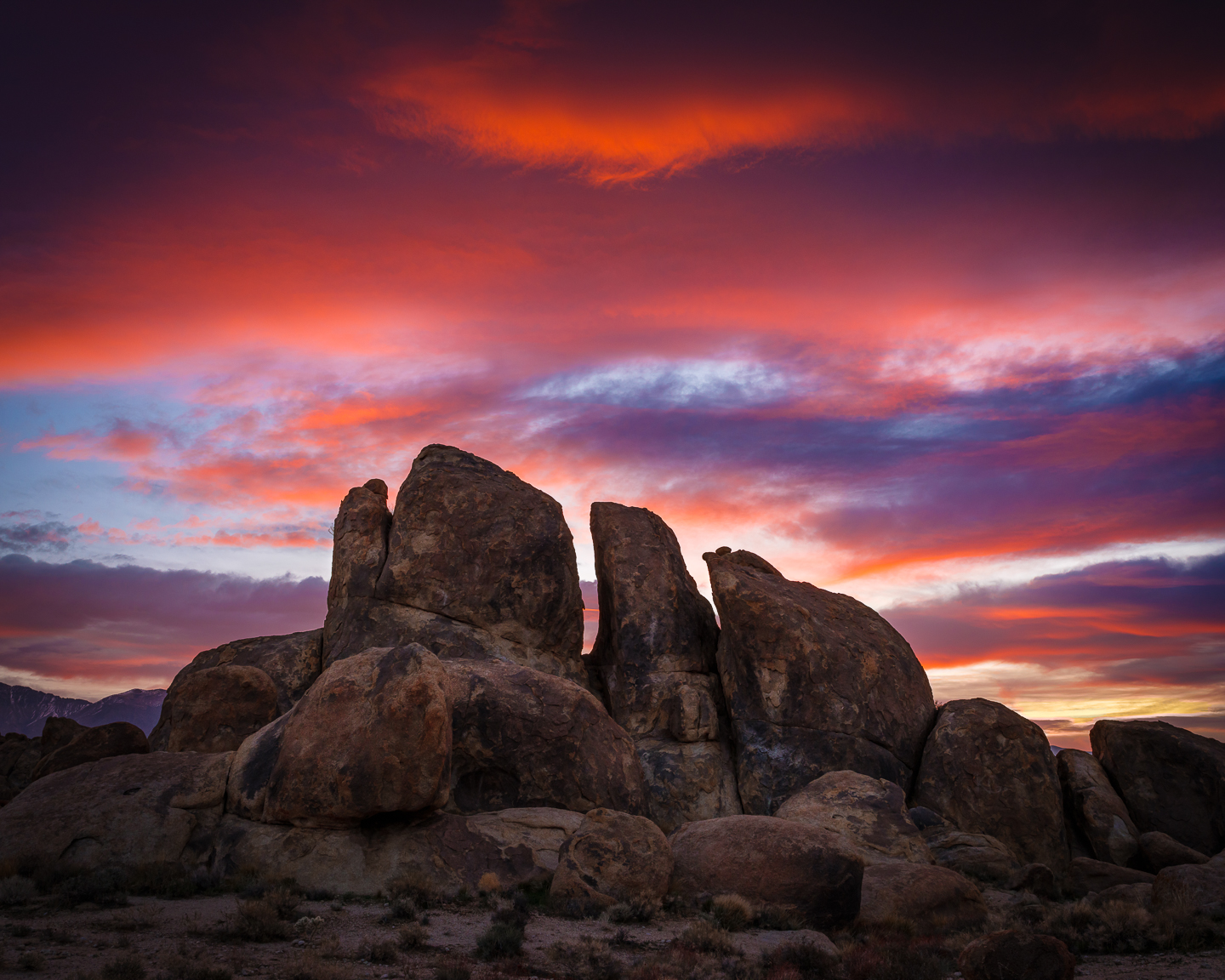 I’ve written previously about the need for photographers to be mindful of what is happening around them and not be trapped in minding only what is in front of their lens. Even though I have plenty of experience with this, it’s still sometimes difficult for me to heed my own advice. The image featured here, “Alabama Hills Sunrise,” is a case in point: I was so certain that the sky color was going to appear over the Eastern Sierra Mountains that even after seeing how brilliant the sky was lighting up in the opposite direction, I was still reluctant to abandon my original composition.

Maybe it was because an application I frequently use to predict sunrises and sunsets had so clearly shown that the light would be over the mountains to the west. Maybe I thought the color would move from east to west, as it sometimes does, and I would get the picture I had planned. Whatever the reason, I resisted changing my composition for so long that I almost missed getting this shot.

Let me show you a screen capture of one of the applications I was using that was telling me the color would be in the west. The following is what the Skyfire add-on for an app called The Photographer’s Ephemeris can show. The warmer the color, the more likely there will be color in the sky over that area. This screen shot is for the area around Lone Pine, California for sunset on the day I’m writing this post: March 29th, 2020.

In the display, the pin is set to Lone Pine, which is just east of the Alabama Hills. The area around Lone Pine and to the west is colored in cool blue, which indicates not much chance for sunset color there. There is a patch of yellow and red color to the southeast, over Panamint Springs which is in Death Valley, and illustrates a much higher chance of sunset color in that area.

On the morning of my sunrise shoot in the Alabama Hills, the map was showing pretty much the opposite: the red color was just to the west of Lone Pine, and the cool blues were to the east.

As you may be able to determine from the light in my image above, reality was in complete opposition to what Skyfire had been showing me before sunrise. All the color was indeed to the east and none of it drifted over to the west over the Eastern Sierra.

If the Skyfire map had been accurate that morning, it would have looked more like the screenshot image above, with the red over Panamint Springs extending a bit further west, closer to Lone Pine.

After agonizing over the odds of the light moving west and eventually lighting up the skies over the Eastern Sierra for a good 5 minutes or longer, I finally mumbled a few choice words of frustration that I will leave to your imagination, grabbed my tripod, camera and lens, and ran as fast as I could all of 100 feet (if that) to get into position to use some massive boulders as foreground elements for my hastily composed second choice shot. This screenshot from Google Earth shows where I was. The red X and arrow show where I was originally set up and facing. The green X and arrow show where I ran in haste to finally react to the sky:

In hindsight I have to laugh at myself and how hard it was for me to make the decision to abandon my original composition. Especially when thinking about how lame that composition really was and how short a distance I really needed to go to get a better image. Here’s what I found so hard to abandon (which I came back to shoot after the sky show was over just to have a record of it):

I was working towards a classic near/far composition, with some sort of dead gnarly tree in the near foreground, a cactus in the middle distance, and Lone Pine Mountain in the far background.

Even with a brilliant sky over Lone Pine Mountain, I don’t think this would have been nearly as strong an image as what I wound up with, even though what I wound up with is, compositionally, a much simpler image. And yet, I still had an internal struggle to abandon it for something clearly better.  There’s a life lesson in there somewhere, but I don’t know if I’m smart enough to realize it. 😉