A 6-Hour Round Trip Gamble

“That’s a three hour drive!” he reminded me. “Yeah!” I think was my response.

Predicting how much color will be in a particular sunrise or sunset is tricky at the best of times. Even with the help of various apps, counting on the color to be present, much less to be in the direction you hope it to be, is always a gamble. Add in a 3-hour drive, one-way, to be at a specific location in the hopes that your calculations will pay off and you definitely stand the chance of being severely disappointed.

On my recent photography trip to photograph the Eastern Sierra mountains, I was traveling with a fellow photographer and friend named Trey Amick. We were at lunch on our second day on location trying to work out where we wanted to be for the sunset when I suggested Death Valley. I believe his response was mix of confusion and disbelief. “That’s a three hour drive!” he reminded me. “Yeah!” I think was my response. I then pointed to the display on my phone, which was set to one of the apps I use to predict sunset color. It was showing a rather significant amount of red over the Panamint Valley and Death Valley areas.

“But it’s a three hour drive!”

“If you want to; I’ll go wherever you suggest.” he said with more than a little doubt in his voice.

To put this conversation in context: We had flown in to Las Vegas two days prior and had driven through Death Valley on our way to Bishop, California, which was to be our base-of-operations for this photography trip. We stopped in Death Valley for a few hours to explore as this was the first time Trey had been in the park. We had hiked out onto the salt playa at Badwater Basin and had seen the state of the salt polygons and they looked pretty good. Trey had taken some images there, so he already had some shots of the polygons, but in the late morning hours, not at sunset. So, I was basically asking him to possibly waste the better part of a day which we could be using to shoot and explore places he hadn’t already seen, in order to go back to a place he already had on the chance that we’d have a decent sunset there. Hence the doubt.

However, while I’ve visited Death Valley four or five times before, I’d never had any luck shooting the salt polygons in Badwater Basin. Two previous visits had actually coincided with standing water in the basin, which was cool to shoot in its own way, and the rest of my visits either had too many clouds, or too few, to result in decent sunrises or sunsets from that location. But when I saw how nice the polygons looked in our brief visit at the start of this trip, I knew to keep an eye out for potential color predicted in that area.

“Salt Polygons?” you may be asking yourself. The Badwater Basin in Death Valley is the bottom of an ancient salt-water lake, so it’s basically a huge valley full of salt left over from when the lake evaporated. This is the lowest point in North America at 282 feet below sea level. When it rains in Death Valley, and it does rain in Death Valley, usually during the winter, water will collect in the valley and as that water evaporates, the salt dissolved in the water begins to form polygon shapes like a honeycomb. The more recent the water evaporation is, the cleaner the salt will be, so to get a good photograph of the polygons is a matter of timing. Getting them with a decent sunrise or sunset is a matter of excellent timing.

The combination of clean, distinct salt polygons and a decent sunset was not something I could easily pass up, even if it meant a 6-hour round trip drive. So off we went!

The cleanest salt is usually found starting about 2 miles out on the Basin from the parking area. This is due to a combination of dirt and silt runoff from the mountains to the east and foot traffic from all the visitors to the area. So an excursion with full packs under late afternoon sun isn’t to be taken lightly. However, as you can see in the picture above, conditions were somewhat cloudy, so that cut down on what could have been a very warm trek. I worried that conditions might be too cloudy and that I might have dragged Trey all that way for nothing.

Once we had walked out to the clean salt, I then spent a good amount of time looking for just the right kind of polygons to use as the foreground elements in my image. I was hoping to find a perfect hexagon, but I wasn’t quite that lucky. I did find a pretty decent pair of pentagons sitting back-to-back that just happened to point towards Telescope Peak, the highest peak in the Panamint mountains, so I was pretty happy with that composition. After setting up my camera and working out how to create the image I visualized in my head, all that remained was to worry about the sunset. Even if the skies cleared somewhat overhead, if they remained thick to the west they would block any chance for the red sunset tones I was looking for.

Our luck held out, however. The clouds thinned out just enough to get some nice color to the west over the Panamint Mountains, though the way the color formed was a bit unusual. The red color started at the north and south ends of the horizon and the color to the south gradually moved north as the sunset progressed. Quite strange overall. Those clouds on the other side of the mountain range were doing odd things to the light.

As for how the image itself was made, it was actually one of the trickier images I’ve ever attempted. I needed a field of view much taller and wider than I could get with any of the lenses I possessed, and I needed the focus to be sharp from just in front of the lens all the way out to the mountains roughly 3 miles in the distance. This required a combination of techniques: a single-row panorama to capture the width and height of the composition and a focus stack where multiple images are taken at different focus points and then combined into one image that is in focus from foreground to background. 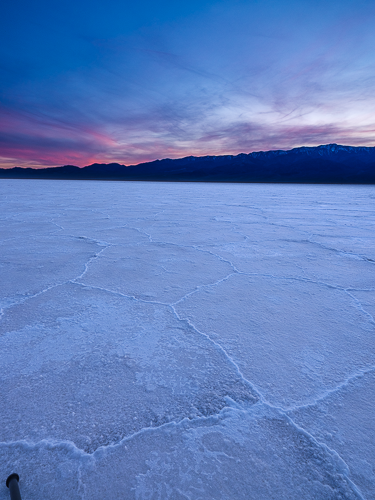 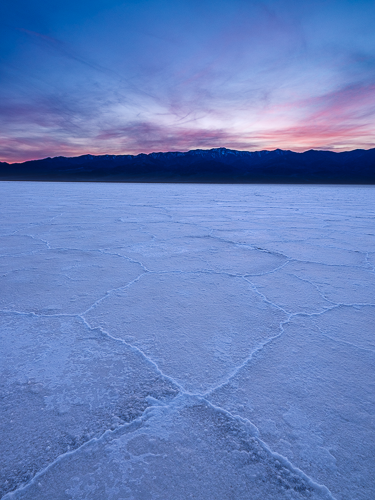 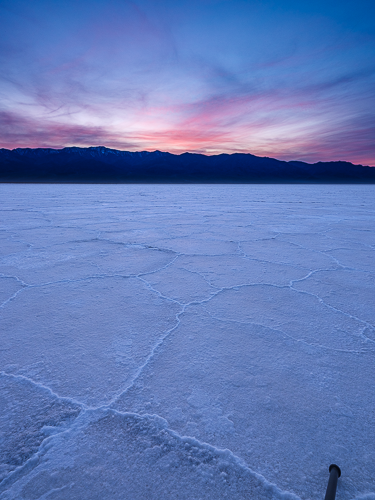 The three image positions that make up the width and height of “Badwater Sunset.”
My tripod legs are visible in the left and right corners.

The single-row panorama to capture the width and height of the composition was accomplished by facing the camera in three different positions. The focus-stack was accomplished at each position by taking 5 images at different focus points from foreground to background. So this rather simple scene is actually a combination of 15 individual images. Shooting the images for the panorama from left to right actually worked out in my favor as I was able to capture the light from the south (the left most image) as it moved north (right) across the scene. Capturing this image in a single exposure simply would not have been possible.

Even had the light failed us, the trip would not have been a complete waste of time: if you ever want to experience how quiet it can get at one of the most remote locations in the country, I highly recommend taking a few hours and walking out to the middle of Badwater Basin. It’s an awesome place to be and worth the journey every time.

Open Edition metal, canvas and acrylic prints of “Badwater Sunset,” as well as my other images from Death Valley, can be purchased here.